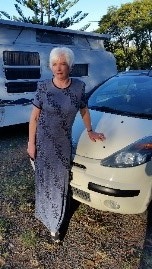 I'm Kay Kelly, I was born in NZ in 1949. Being a girl, I could not study Technical Drawing at college as it was a class only for the boys but after achieving my School Certificate I was the first woman employed by the NZ Post Office in Hamilton as a draughtsperson. I had one son and five daughters with my first husband and after he died I married GK and we had three sons, we now have seventeen grandchildren all over NZ and Australia. In NZ, in 1987, just before leaving for Australia I was in office administration for the NZ Ministry of Works in Wellington. Paul Maunsell who had been an on-line contact of GK's for many years spent seven months chatting to GK about Stemtech, till he finally persuaded him to give it a try. That was seven years ago. As I knew his downhill trend in health would have eventually meant giving up our lifestyle of work and travel I was inspired to try the product for myself. I persevered for twelve months till I was comfortably taking all the products. Within a year of joining Stemtech as business builders, we closed our internet business and we now have a very comfortable lifestyle promoting Stemtech to people as we continue to travel around the world. Apart from my love of God, nothing can compare to seeing such marvellous changes in people’s lives. Recently I joined a gym for the first time ever as I decided that after 6 years on Stemtech products I was ready. Four months later after attending five aqua aerobics classes a week I am a "very happy camper" as the saying goes, my young body shape has returned!